‘A new baby is like the beginning of all things: wonder, hope, a dream of possibilities.’

The news of pregnancy is a moment of unparalleled joy for a couple and as writer Eda J LeShan precisely sums up in the above sentence, a new baby is a harbinger of a new life for the parents, and many others in their circles. In the case of celebrities, the circle becomes much wider, whether they like it or not. And in today’s times of internet and social media, the circle of influence for a celebrity is beyond anyone’s imagination. Which makes it a perfect opportunity for brands to make hay while the sun shines, thus turning a pregnant celebrity into a goldmine for advertisers.Any news – big or small – in the life of a celebrity is a matter of great public interest. And when it’s a baby, well the curiosity is at its peak. Say, for that matter, when Sonam Kapoor made her pregnancy announcement on Instagram earlier in the week, her single post received over 10 times the average number of likes for any other post. Or when Kareena Kapoor Khan shared her baby bump picture on the ‘gram, the post crossed a million likes in no time. Or Kajal Aggarwal’s pregnancy photoshoot crossing the 1 million mark in a matter of hours. Anushka Sharma’s pregnancy post hit it out of the park with over 6 million likes! As reported by Economic Times, Virat Kohli had been getting feelers from brands with child-centric products for endorsements even before the birth of Vamika.

A celebrity is an influencer in their own right, but a pregnant celebrity has a much bigger clout. Advertising gurus will agree, when a brand is presented with a client list, expecting celebrities and new mothers are on top of the lineup. From pregnancy test kits, health drinks, juices, supplements, personal care, to baby products, clothing, fashion, hygiene, and travel, the options are limitless. In this week’s #BigStory we explore the world of celeb pregnancies through the prism of the advertising industry.

Moulding careers while embracing parenthood
Gone are the days when parenthood meant making compromises in career and lifestyle to accommodate a new addition to the family. Couples today want to get the best of both worlds and with changing civilisation, it is definitely possible. A micro influencer can easily command a minimum of 30K for a post. Imagine the scale an A-list celebrity can, for an endorsement!

“Being parents is a change of life common to all, parenthood does not see the status of a person. Which enables a celebrity to connect better with the most important segment of audiences that every brand manager is trying to influence. Celebrity parents act as the perfect catalyst to amplify the brand message. Now celebrities are moulding careers along with parenthood, which not only enables them to expand their reach, but also allows them to take a break and come back anew. Being a parent or being married is no more a negative in the world of entertainment,” says an industry insider.

Actress Teejay Sidhu, who is a mother to three kids, endorses a range of products like a baby carrier, a juice brand, a body cream, and also modelled for lifestyle brands with hubby Karanvir Bohra. Being a mom in the public eye helps you make a connection with the audience, she had said in an interview wherein she also candidly admitted that she was earning more from her endorsements than she ever made on a daily soap!

Celebrity advantage for a brand?
Does a pregnant celebrity command better prospects for a brand? Now that’s a debatable proposition that can be explored from multiple perspectives. While such endorsements can be a win-win situation for both celebs and brands, such moves also contribute in breaking stereotypes and changing age-old mindsets associated with pregnant women.

“Every brand is looking for more awareness and they can do advertising through awareness. Having a celebrity is an advantage and for a pregnancy product, it is always an advantage to have a pregnant celeb for endorsement. A celebrity adds credibility by saying that they are using the product,” says marketing specialist, Deepesh Shah. 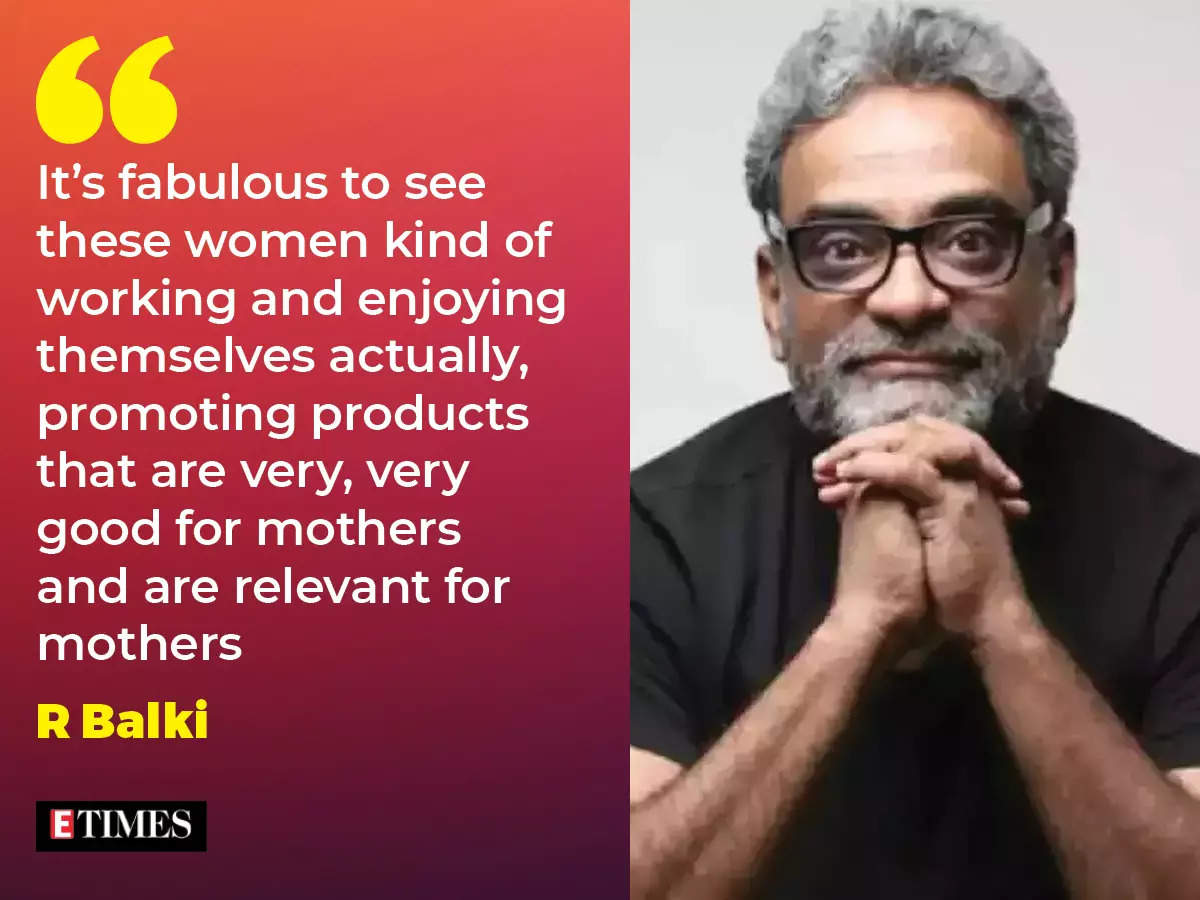 Filmmaker R Balki who’s also a former Chairman of one of the top advertising agencies weighs in. “It depends on what the product is,” he says.

“A celebrity doesn’t guarantee you a sale. It depends on how relevant it is, what your message to the people is, and how interesting it is for people to then latch on to it. So the celebrity alone will not do the job. A lot of other factors are at play,” he says.

Balki feels it is a fantastic time we are living in where someone can continue to work while embracing parenthood. “It’s fabulous to see these women kind of working and enjoying themselves actually, promoting products that are very, very good for mothers and are relevant for mothers,” he adds.

A solid celebrity endorsement gives brands that quick reach that they desire, reasons Rubeena Singh who is a Country Manager for a short video app. “If a brand which is in that space of motherhood products, finds a pregnant celeb to partner with, then obviously there will be an advantage,” she says.

A personal choice
Being a celebrity puts one in the public eye and therefore any life update is going to get attention. Kareena Kapoor Khan has been associated with several brands including gadgets, soft drinks, shampoos, soaps, sportswear, pregnancy kits and more. She is one of the highest paid female endorsers in India with the most number of brands to her credit. She set an example by continuing to work during her pregnancies and the fact remains that she received the most number of brand endorsement offers during her pregnancy. During the Covid-19 lockdown, she endorsed baby care products with husband Saif Ali Khan.

It is up to them as individuals to decide whether they want to use the opportunity to make more wealth, says Rubeena. “I think we have to break through that cultural mindset that pregnancy is very private and all of that. But each to their own, it’s everybody’s personal choice. There are some who don’t want to talk about it, it’s like social media… Some people just don’t want to be on social media, they want to keep their life totally private, but some people want to share. On the flip side of it, is it fair just because she’s an actress and she’s pregnant, she should have no work and she should just sit at home quietly and decline the movies or everything that she’s doing. That’s not fair either,” she explains. 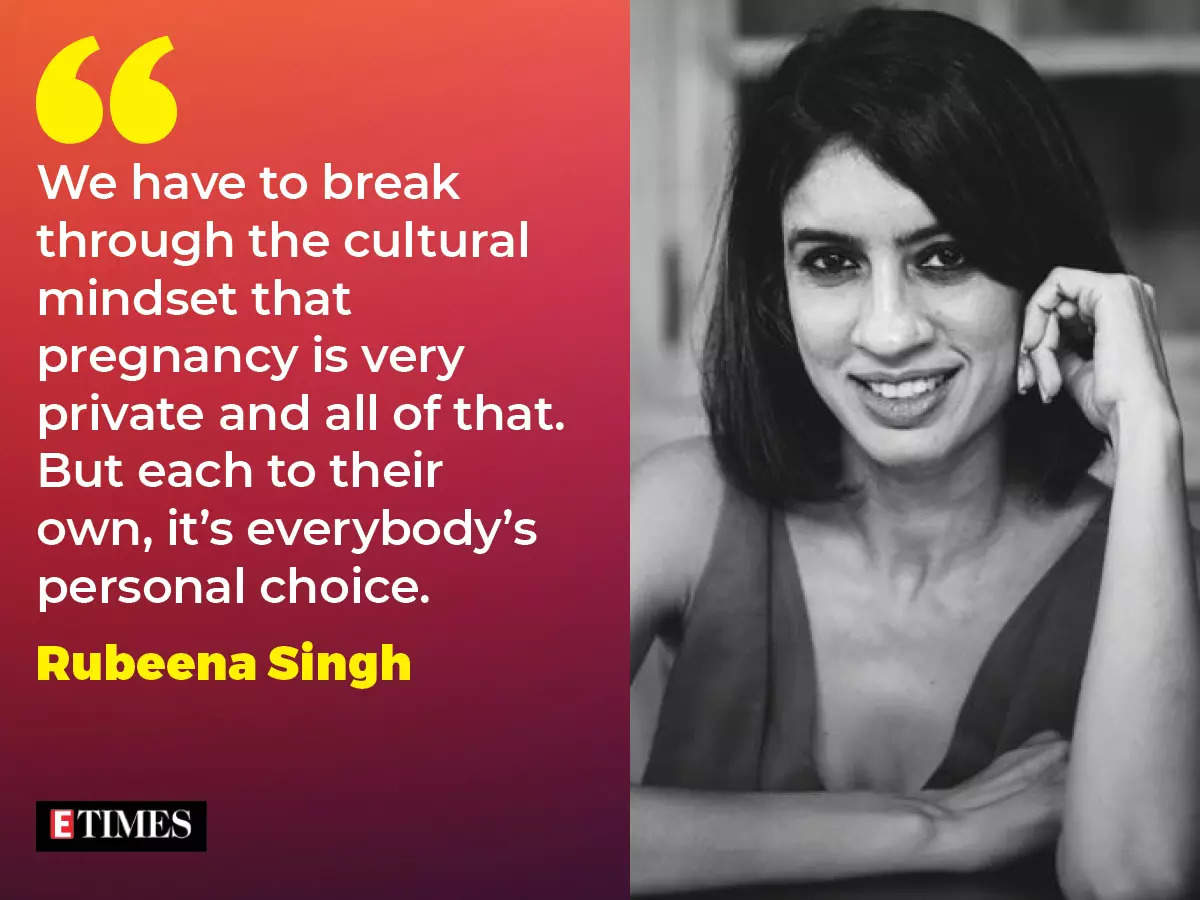 Does pregnancy open new avenues for celebs?
Telly actress Anita Hassanandani enjoys a humongous fan following, that had been awaiting her good news for the longest time. So when she actually had one to share during the first lockdown, she did so exclusively in collaboration with a popular short video platform.

“A lot of brands got in touch with me during my pregnancy,“ shares Geeta Basra who welcomed her second baby during the pandemic last year. “I was on the verge of promoting and signing a deal with a lactating product. But there are certain things that you should know,” she flags off her concerns emphasising that one must do ample research on the product to understand what it is, ensure it is safe enough for use before signing the dotted lines. 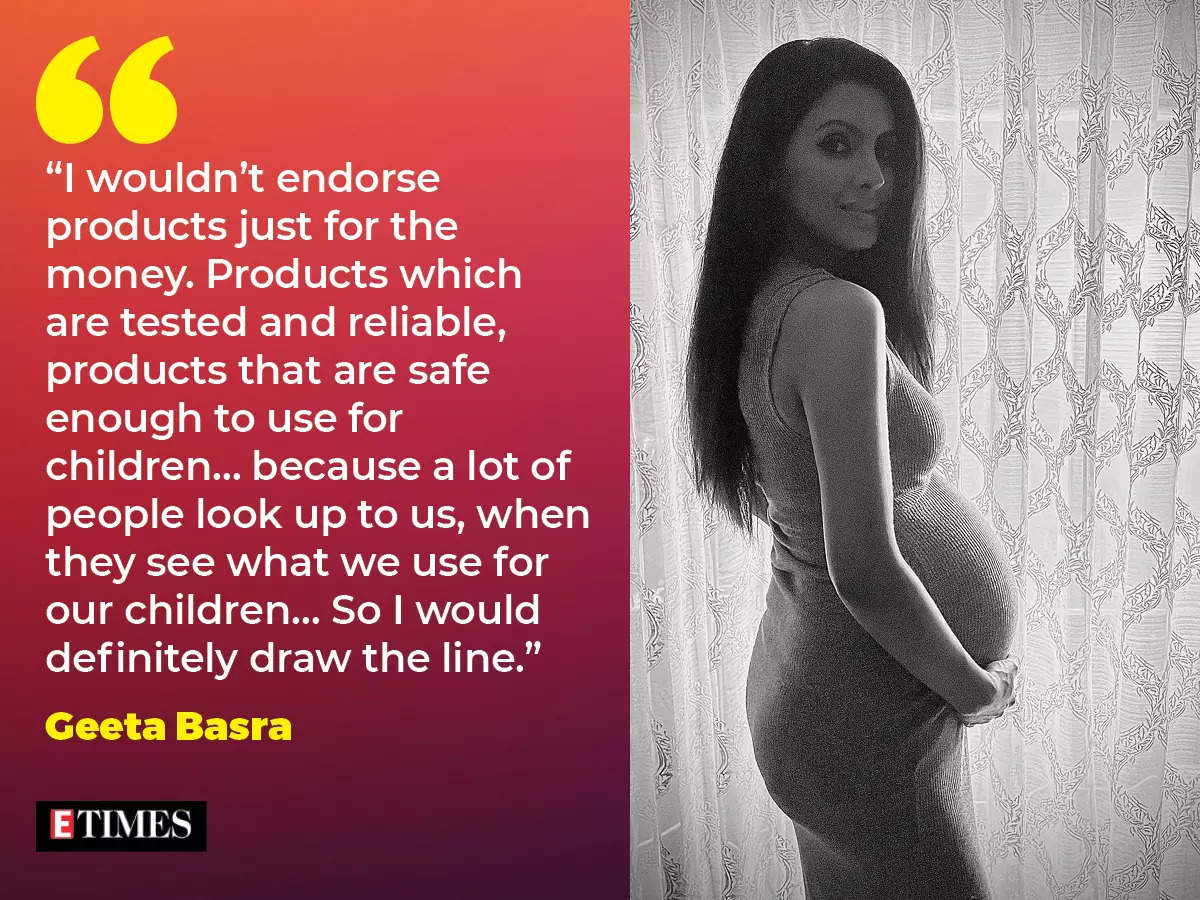 Drawing the lines on endorsements
“I wouldn’t endorse products just for the money,” explains Geeta. “Products which are tested and reliable, products that are safe enough to use for children… because a lot of people look up to us, when they see what we use for our children… So I would definitely draw the line. You will never ever risk anything with children, you don’t want to give any kind of news or awareness for products you’re not sure about,” she says. 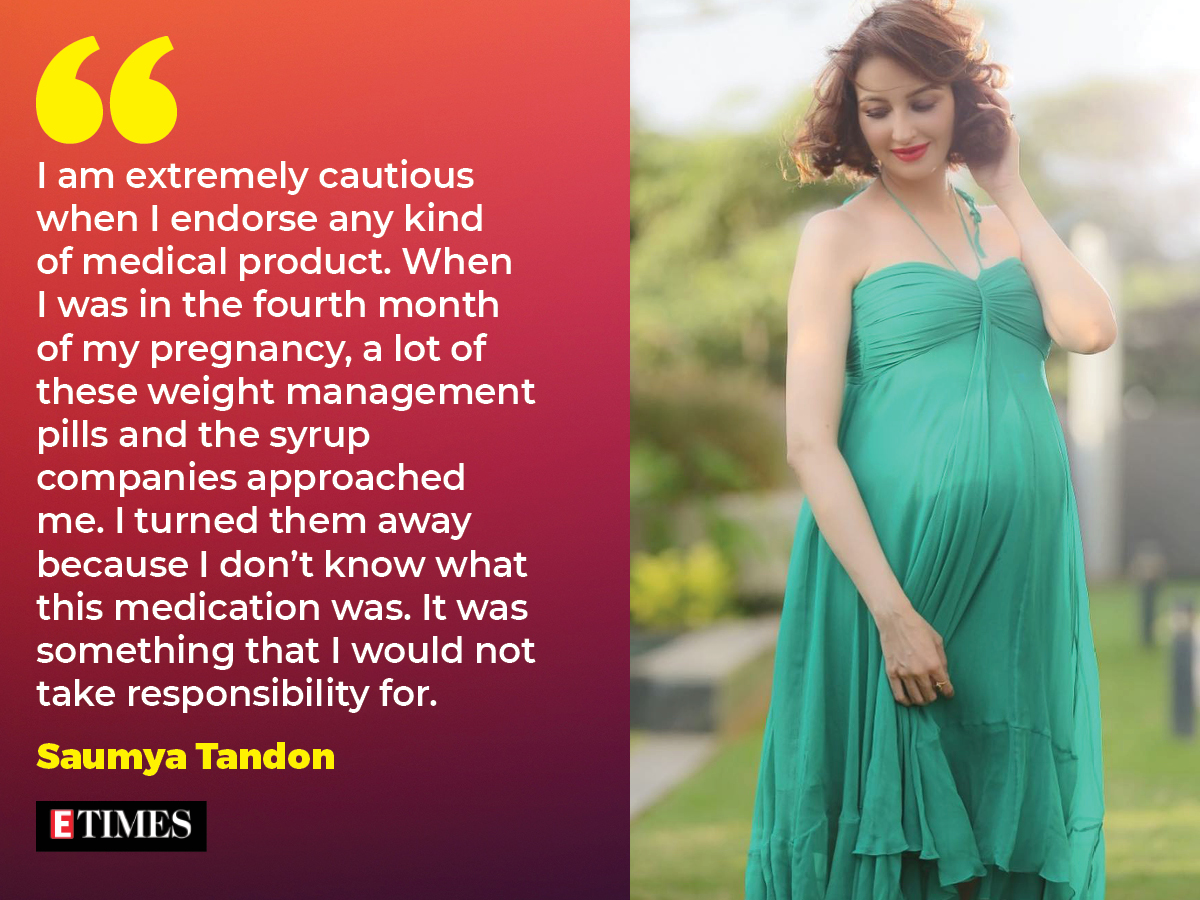 Actress Saumya Tandon did quite a few brand endorsements after her pregnancy, and she believes as long as one is doing it with social consciousness and integrity, there is no harm in it. “I am extremely cautious when I endorse any kind of medical product, because when I got pregnant and I was in the fourth month, I was in shape and I was doing ‘Bhabiji… ‘ a lot of these weight management pills and the syrup companies approached me. I turned them away because I don’t know what this medication was. And this weight loss medication was something that I would not take responsibility for. And I personally didn’t take it, so I’m not going to endorse it. But if it is, say, a diaper or a medical cream which is not harmful, that I will endorse and I have endorsed,” she says.